Ania Gola-Kumor was insistent that a phone interview would not be enough to truly understand her work--“I just don't think people can see me without my painting around me”--so rather, we skyped. Immigrating some thirty years ago from Eastern Europe, where she was classically trained in the arts since childhood, Ania uses her paintings to express herself when words aren't enough. And while there was no need for her to be self-conscious about her grammatically perfect, albeit musically accented English, I did bless the technological innovators for providing me with a means of actually seeing into Kumor's colorful world. 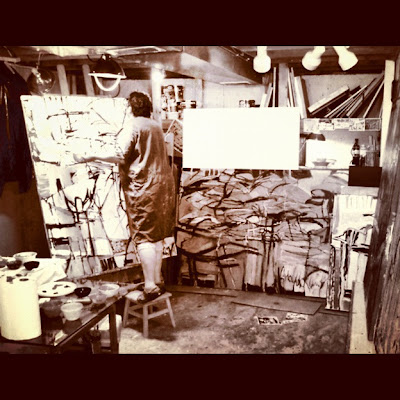 When considering what I could possibly write about for this blog, I headed to the quiet gallery basement in search of some inspiration amongst the canvases stored below. Flipping through canvas after canvas of dreamy colors and idyllic scenes, I came to an abrupt halt as I came across one of Kumor's magnificently massive canvasses, immediately entranced by the intensity and power of each intentional stroke. Kumor is humble and reluctant about these paintings that so enamored me, feeling somehow that they are unfinished even in their completeness—desiring to pour even more of her heart and vision onto the canvas in layers and layers of color and feeling that make her paintings so raw and juicy.

But in Kumor's adept hands, a painting might never be finished. “I have to paint. If I don't have a painting to paint, I repaint over finished canvases”. She explains her compulsion to paint as a need to express her emotions, without which she would go crazy. In America where she originally came as a political refuge, where speaking English (her third language) is the norm, it is easy to see how words could not be enough. Truly and openly communicating one's emotions in a way that in honest is nearly impossible in any language--language is fallible to express that which is most essential to our souls.

Her paintings are an attempt to capture the feeling of a moment. They are abstract aerial landscapes--not so much that they are one refracted image of a physical place, rather, that they are the collective memory of the color and emotion of being in that space. Since coming to Colorado, her artistic palette has evolved to fit the landscapes she sees here telling a new story—the reds of the rock, the yellows of the sky, the black of the shadows where the two former meet.

The other aspect Kumor attributes to her evolution as an artist in the past twenty years has been her children. Literally, the persistent demands of raising children forced her to reevaluate how she was able to create art. “I didn't have time to wait until I had the courage—I just had to do it. Bolder, faster, more spontaneous.” Her paintings speak with strokes of power, colors of emotion, a voice that calls strongly out for all to come and listen to what it has to share. Her artistic vision is no longer soft-spoken or shy, it is a declaration of her world and how she chooses to exist within it.
Posted by Sandra Phillips Gallery at 5:14 PM